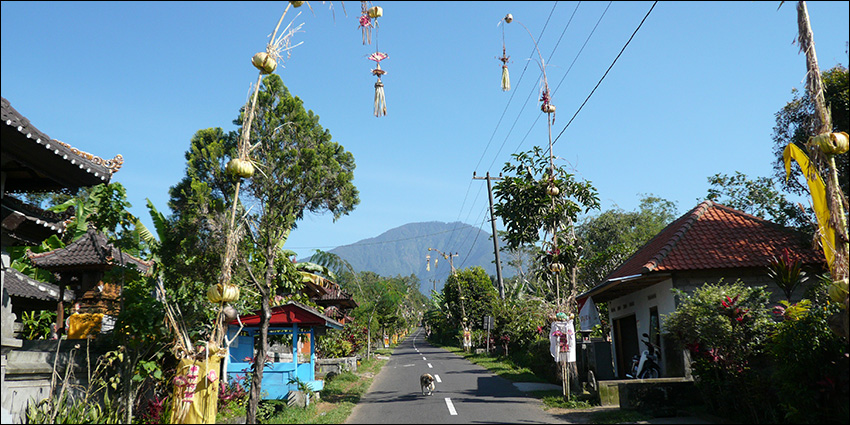 Imagine a country where there is an entire day each year when everyone turns off their tech and spends 24 hours in silence. Time to go inside, take stock of life, and contemplate the year ahead.

Well, there is a place where this happens. It’s not an entire country, but it is an entire island of four million people. The day is called Nyepi and it takes place on the Hindu island of Bali in Indonesia. It’s the first day of the Balinese New Year according to their Saka lunar calendar, and during the 20 years I lived there, it was absolutely my most favourite day of the year.

The Balinese celebrate New Year’s Eve on December 31 in a similar way to the rest of the world (drinking, merriment, partying, and so on). But for hundreds of years, they have also observed a spiritual New Year during the new moon in March.

In the days before Nyepi, massive purification ceremonies are conducted in all parts of the island and in some villages, giant papier mâché demons called ogoh-ogoh are created. On the eve of Nyepi, there are fabulous parades of these demons through the streets carried on bamboo frames by young men, accompanied by crashing cymbals and mobile xylophone-like gamelan orchestras playing at full volume. The idea is to make as much noise as possible, and it’s an unforgettable audio-visual experience.

At midnight, the ogoh-ogoh effigies are set down at crossroads, together with copious offerings to the bhuta kala (low or angry spirits) they represent. After a grand ceremony, the ogoh-ogoh are set on fire. The Balinese understand that crossroads are intersections for energy as well as traffic, and they believe that the reason accidents so commonly happen at crossroads is because of the angry spirits which congregate there. By making these offerings and setting fire to the effigies, their intention is to placate the spirits and purify these places. Many people stay up throughout the night making as much noise as possible until dawn, when stillness reigns throughout the land.

For a 24-hour period starting at 6.00am, everything comes to a complete standstill. No fires can be lit, no work can be done, there is no travelling, no noise, no indulging in worldly pleasures and no exvolution (the turning outwards of consciousness towards grosser levels of existence). Everything is turned inwards. No equipment can be used, no lights can be turned on, no cooking can be done, no-one is allowed to go out of their homes and tourists are not allowed to leave their hotels (except in a medical emergency), planes are not allowed to take off or land, and no TV or radio stations are allowed to broadcast.

Not everyone adheres strictly to all these rules but many priests (and there are tens of thousands of them in Bali) spend the day fasting and meditating, and security guards patrol the streets to make sure people stay at home, remain quiet, and do not turn on lights.

This year, the Balinese government took Nyepi one step further and ordered all telecommunications companies to shut down mobile internet access to social media for the entire 24 hours too. I’m sure this decision was greeted with dismay by some (many Balinese are as addicted to their phones as westerners), but part of the reason why Bali’s spiritual culture has endured so long is because it keeps pace with modern developments in this kind of way. I was very glad to hear they have taken this step.

I can’t begin to imagine the headache the flight ban causes for airlines, and I absolutely love the fact that the Balinese put their spiritual priorities first and don’t give a fig. This year Nyepi was on March 17, and a total of 244 domestic and 238 international flights were cancelled. Not postponed. Cancelled. This means many of the international planes would not be where they were supposed to be for onward flights and the world had to deal with it and sort it out. It must cause havoc with their schedules each year.

If you stay in a hotel over Nyepi, you’ll get a feel for it, and this Huffington Post article gives a taste of what it’s like: Bali’s Nyepi: A Day of Silence Worth Experiencing

But the real Nyepi takes place in the villages of rural Bali. Without the busyness of everyday life, the dogs stop barking and the cocks stop crowing. If talking is necessary, it’s done in hushed tones. Children play quietly. The lush tropical silence envelops you.

For one whole day, there is nowhere you have to be and nothing you have to do. What happens is that all your internal organs come to rest and c-o-m-p-l-e-t-e-l-y  r-e-l-a-x. It is the most amazing experience. It is a time for meditating and dwelling on your life, and focusing on what you want to happen in the following year.

After nightfall, the effect is even more profound as you sit surrounded by complete darkness and complete silence in the mellow companionship of those you love, mulling over the previous year and contemplating the new. It feels like it could go on forever, and you wish it would.

Then the next day, everything is back to normal. With the first rays of dawn, the roads fill with people, bikes, cars, trucks and buses, and Nyepi feels like it was a dream.

If you ever decide to visit Bali to experience Nyepi, it falls on a different day in March each year, so you’ll need to check. In 2019, it’s on March 6 and in 2020, it’s on March 25. And if you visit Bali at any time, to fully immerse yourself in the spiritual culture turn off your digital media for the entire time you’re there. That’s what I always do, and the rest of the world gets on perfectly well without me.

Karen Kingston is the world's leading authority on space clearing and a leading expert in clutter clearing. Her first book, Creating Sacred Space with Feng Shui, has sold over one million copies in 16 languages, and her second book, Clear Your Clutter with Feng Shui, has sold over two million copies in 26 languages.
View all posts by Karen Kingston →
This entry was posted in Bali. Bookmark the permalink.

2 Responses to Digital detox in Bali

This site uses Akismet to reduce spam. Learn how your comment data is processed.