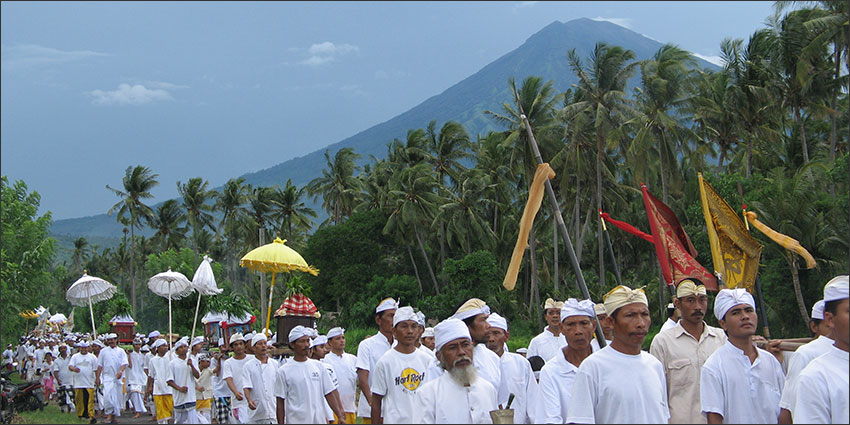 Just about every culture in the world has its own form of space clearing, but nowhere has it been so highly developed as in Bali, where it’s a complete way of life.

Daily purification rituals are performed in every building throughout the land. Each family compound and workplace has a special shrine that is energetically connected to the village temple, which is connected to the regional temple, which in turn is connected to the mother temple at Besakih. There are hundreds of thousands of shrines and more than 20,000 temples on an island that’s about the size of Luxembourg, or twice the size of Rhode Island if you’re American. Either way, that’s a lot of temples and a lot of daily rituals in a very small area.

They also do elaborate purification practices every 5 days and every 15 days according to the Balinese 210-day Pawukon calendar. There are other rituals that are done according to the cycles of the moon. And there are huge islandwide ceremonies lasting many days that are performed every 5 years, every 10 years and every 100 years.

The last 100-year ceremony, called Eka Das Rudra, was in 1979. I wasn’t there for that. But I was there for the 10-year ceremonies held in 1999 and 2009, called Panca Wali Krama, and they were absolutely amazing. Massive forces were landed in every temple on the island, and all three million Balinese Hindus made a pilgrimage to the mother temple during the 42-day ceremony if they possibly could.

I was teaching a space clearing practitioner training during the 1999 event and took my group to see the enormous melasti ceremony at the mother temple, where a grand procession of hundreds of priests and thousands of helpers carried the sacred objects to be ritually purified in the sea. The journey there and back covered 40 miles (about 64 km) and took three days to complete.

I still remember to this day the extraordinary energy of that procession as it approached the place we were waiting by the roadside, about a mile from the temple. The density of presences was so great that I could feel it long before I could see it. Officials walked ahead, announcing loudly, ‘The gods are marching! The gods are marching!’ They made gestures to implore people to sit on the grass rather than stand, and I later learned that this was done primarily as a measure of respect to the priests and the presences, but also served a very practical purpose because it meant people didn’t have so far to fall if their knees gave way, as so many did!

Next came the first whiffs of incense, carried on the wind, and then the crashing cymbals of the mobile gamelan orchestra as the procession came closer and closer.

As it passed in front of us, the priests looked out of this world, completely intoxicated by the high spaces in which they were immersed. Their bodies were walking, but their consciousness was spread in vastness, oblivious to anything around them, at one with the gods.

Bali’s so hot and humid that people don’t generally like to walk anywhere, but when it comes to processions of this kind, it’s different. ‘It’s as if my feet have wings,’ one man told me. ‘I carry the gods and the gods carry me. I don’t feel the distance of the journey or the passing of time.’

I felt supercharged for days after witnessing and being part of this. I had always felt there were powerful forces at play in Bali but had never felt them in such potency before. My group of trainees, unfortunately, were not so ecstatic. Not being used to such levels of force, the experience blew their little socks off, and the course had to be suspended for a couple of days until they all recovered. I learned from that NOT to schedule trainings in Bali to coincide with momentous spiritual events!

Karen Kingston is the world's leading authority on space clearing and a leading expert in clutter clearing. Her first book, Creating Sacred Space with Feng Shui, has sold over one million copies in 16 languages, and her second book, Clear Your Clutter with Feng Shui, has sold over two million copies in 26 languages.
View all posts by Karen Kingston →
This entry was posted in Bali. Bookmark the permalink.

This site uses Akismet to reduce spam. Learn how your comment data is processed.